In and Around Kumasi

One of the things on my list that I never got to last year was a trip to Kumasi – Ghana’s other city apart from Accra. It had always been of interest to me for two reasons: It’s the cultural epicenter of the Ashanti people, so it has a lot of cultural appeal to it; and it is also home to Kejetia Market, arguably the largest open air market in all of West Africa. So when Larissa said she was interested, we planned it fairly last minute to go two weekends ago, then pushed it back to last weekend. She and I have a motivation problem in pulling plans together, it turns out.. In any event, we took three days, Lara ended up joining us as well, and we planned a hike through some caves north of the city, a visit to a traditional Ashanti shrine, a morning exploring Kejetia Market, and an afternoon at Lake Bosumtwi.

The Ashanti Shrine in Besease

The wonderful and very old caretaker of the shrine.

Friday we spent most of the day traveling. The road to Kumasi is under construction and patches of it are completely nonexistent, so it was a longer journey than expected – about 6 hours. We also had a massive struggle trying to find our hotel. The trusty Bradt Ghana guidebook has never failed me, until Kumasi. All the street signs were wrong and hotels weren’t where they were marked. At one point we gave up, found a stand on the street, sat down, and ate butter bread and drank a couple of Alvaros instead. But when we ended up in some far corner of the city near the Kumasi prison, with the help of a scary prison guard with a very large gun, we found our way. We attempted to go to Kejetia Market that night, but it got too dark too quickly. Instead, as we tracked back to our hotel, we came upon this lovely restaurant on the street. Delicious food, and a very funny woman.

The caves hike was my favorite part of the weekend. We had to taxi and tro hop from northern Kumasi to Mampong to Kwamang. The drive up to Mampong was incredible. We basically drove around a mountain, so every turn from one corner to the next was simply beautiful. My favorite parts of Ghana are the rural, interior areas that are nothing but luscious green creation, often with deep clay-red roads carved out of the land, and blue-black rivers and lakes spotting it every so often. It’s humbling in a way, to see that wide expanse of pure land.

When we arrived in Kwamang, though, it turned into quite an operation… The random guy on the street we asked told us the guide was out at his farm, so we must find his wife. He proceeded to take us around this tiny village to the family compound, but the wife wasn’t there. So we went to the local bar, of course… There we met another man who I found terribly interesting. Typically when these things happen, this person will sit and wait with you awkwardly until the guide comes and seem entirely unstressed about it all, simply saying, “Yes, yes. He is coming soon.” This man, however, was out in the street pacing and circling around, yelling to himself, making half a dozen phone calls, and frantically sending people to find the man or his wife. I found it all very comical only because it was so decidedly not Ghanaian.

When the guide showed up, we were greeted and told a bit about the caves – the Ashanti ancestors had come to this area and lived in the caves, before setting up this little village and more throughout the region. Then we were welcomed to see the caves – on one condition: we must take Schnapps with us. “If you bring it and pay respect to the ancestors, the bats will be fine. If you do not, the bats will hurt you.” So we bought a bottle of Holland’s finest Schnapps to pay respect to Ghana’s Ashanti ancestors and we were on our way. It wasn’t the hike we expected it to be – another failure of the guide – but the caves were something to see. It was a pretty large set, with a few compartments, and a couple spaces we had to crawl on the ground to get through.

Cheers to the Ancestors 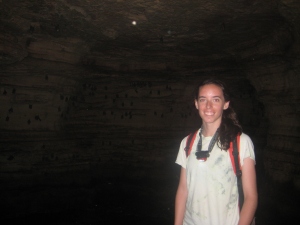 Lake Bosumtwi, at the town of Abono, was beautiful as well. It’s the largest body of fresh water in Ghana, formed by a meteorite impact, and the site of a growing ecological project to conserve it. It was really relaxing to spend an afternoon there before heading back to Kasoa. 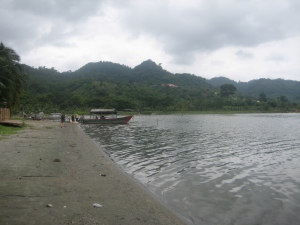 I also loved Kejetia Market, of course. I have no idea why, but I just love open-air markets. I think they’re incredibly interesting. A local told us Kejetia is much quieter on Sundays, and since it was our last chance to go, we went in the morning. The market is massive. It also has impressive infrastructure – complete areas that are built up as a butcher shop area, other parts with small stalls for food, and a whole section of closed door shops that house fabrics. It was indeed pretty quiet from what I could tell, but it felt busy to me, so I can’t imagine what it would have been like in full swing.

There were certain things I didn’t like about Kumasi, though. It was much higher hassle than anywhere else I have traveled in Ghana – which is really saying something for how much of this country I have experienced. Transit there and away and throughout the Greater Ashanti Region was unnecessarily difficult to maneuver and more expensive than it ever should be. Take that with a grain of salt, surely, because by virtue of traveling in a developing country, it is ridiculously cheap in absolute terms, but comparatively expensive.

I was surprised by how much I enjoyed the actual city of Kumasi. There were a lot of interesting people, some very different than you’d find anywhere else in Ghana. We were basically stalked by a local artisan that had set up shop across from our hotel, but he was kind. We got an earful from a woman selling boiled eggs on her head about how she disliked what the Chinese were doing in Ghana – something I found terribly interesting after a semester in the Africa Bureau at State. There was also a small group of Arab Africans in the city, which I was really surprised by. None of us could really make a solid guess as to where they were from exactly, other than Northern Africa by the way they were dressed. Sadly, a few of these children were beggars in Kumasi, though there were a couple whole families. On the whole, I typically don’t like the ultra urban areas of Ghana such as Kumasi. Even though I’ve lived in cities for the last three years of my life, the feel of urban Africa is something different altogether. And not always enjoyable – its rather chaotic and disorienting if you haven’t spent much time there. Kumasi surprised me, though. After wandering the streets in between our adventures outside of the city, I enjoyed it quite a bit.

← Letters from the Kids
Amponsah Joshua →

One thought on “In and Around Kumasi”