A Month in the “Kingdom of Decadence”

As of this week, I have been in Madrid for a whole month. What !? It does not feel like that, or maybe it does? I’m not really sure. But here’s a couple pictures of the fun to start:

I have surprised myself by how comfortable I feel here already. I have settled rather well into my home-stay, living with a crazy and hilarious Spanish grandmother named Amelia. She always has a full pot of coffee and chocolate pastries in the morning and a delicious dinner for me in the evening. She lets me take seconds, and tells me I eat well – not sure yet if that’s a good or bad thing. Amelia cleans my room, washes my clothes, and gives me an umbrella when it rains.  She gets mad at me when I don’t go out on Thursday nights, or if come home before 3am on the weekends. She thinks I work too hard, but nevertheless gives me cafe con leche and cookies when I look stressed and tired at my desk in the afternoons. I tried explaining to her what finishing a senior honors thesis feels like, but my Spanish was not up to par for that particular range of emotions. I haven’t been this well taken care of in quite some time, probably ever. I am spoiled and it is lovely. 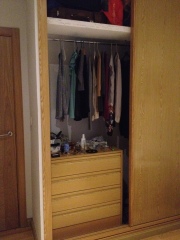 I also love the neighborhood I live in, with lots of little shops, cafes, restaurants, a big open park, and even a track nearby. I love the grumpy doorman in the building, the odd little elevator I take up to our apartment, and my little room inside it. Everything in Madrid, in all of Europe I’m told, is small-sized. They are more economical, more efficient, less grandiose. I think like it.

Classes are solid, though more of an afterthought here: two sciences, Spanish, and another government course. Sadly, Economics of the European Union was cancelled due to low enrollment. Apparently no one else found the potential in that topic as thrilling as I did. Truly a shame. My better science course, Environmental Biology, is taught by a brilliant young Spaniard. He is one of these working professors that so earnestly loves what he does and so eloquently conveys this passion, that you cannot help but love it as well. I have never so enjoyed the subject of the reintroduction of wolves into Yosemite National Park before. There’s also the added value that our “labs” are going to be trips to the zoo and hikes to the mountains. As Raul says, “We will go to see the Nature. And then, you will believe me what it is I am telling you.” Unfortunately, my second science – The Built World –  is not even worth the time… This was expected, but still frustrating. I’m learning the basics in Spanish 101, starting from scratch, but with every opportunity to ask a few “¿Cómo se dice…?” to the old British man who wears lots of sweaters and tells a dozen well-rehearsed jokes every class. I laugh. They’re funny and he’s adorable. My government course, Global Environmental Threats of the 21st Century, is taught by perhaps one of the most intelligent and eccentric professors I have ever had, Oscar. Everyone from the most lax of classmates, to the Vice Provost of the University told me to enroll in his class, and I am not disappointed. Though the material is more of the same I’ve studied over the years, Oscar presents it in such a different theoretical fashion, it is all new in its own way. His rants about population trends and irresponsible fishing industries are quite enough to keep me interested. My notes thus far read more like a series of Oscar quotations than lecture notes, which is quite alright with me.

He in fact inspired the title here during one of these rants. Which brings me to life in Madrid, in all its glory.

A native of Madrid, as he proudly and often claims, Oscar said of his city that “it is like a Kingdom of Decadence, where we go for a cerveza and tapas, and we siesta in the afternoons and we go to dance until we are coming back stupid and dead, and if you are not drunk at least all of the time, you are like a fucking loser or something.” I won’t challenge that, not even for a second. Madrid is a crazy city, with a disorienting day that begins much later, has several hours break in the evening, comes alive again late at night, and often ends only an hour before dawn on the weekends. While I find the clubbing culture in Madrid no more or less appealing than I did in Boston or DC, I have begun to find my own place, as always. I have made a few friends from the group that came with me for just the semester, some who have been here a bit longer, and a couple Madridlenos who suppressed a scowl when I told them I was going to Barcelona. I’ve also recently discovered a coffee-shop/bookstore/bar that’s home to a small crowd of expats, English and Spanish speakers from all over. They are a very odd bunch, but from what I can tell, cool people. And there’s lots of classics for me to read there, so I’m happy.

Madrid is a wonderful and intoxicating city. But I don’t love it yet. I think it’s a difficult one for me to love so soon. It’s an easy place to be, to meet lots of people, though not necessarily lots of Spaniards. It’s lovely to eat amazing seafood, tapas, jamón, and paella. To drink even better cafe con leche, vino tinto, and sangria. To take a break from life, and still learn so much. I don’t love Madrid, but I imagine that will change. And as I have begun to explore more of Spain – Sevilla, Barcelona, Toledo.. I am learning the deeply layered history of this unique country, and all the ways it has been influenced by such history and culture. It is humbling to see buildings, to walk down streets, to pray in cathedrals that are older than my own country, and with far more character. More than just Madrid, Spain as a whole is a good place to be. And I think I grow to love it more each day.